(This article has been simplified for young children)

Turns out it really depends on culture, history and even religion – not so much on science!

Imagine looking at Earth from space. The world’s not necessarily ‘this’ way up – it may not be the North Pole. As far as astronomers can tell, there really is no ‘up’ or ‘down’ in space. 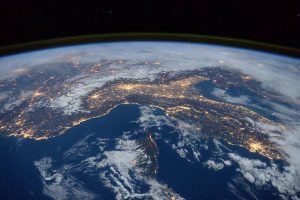 Which way is earth facing?

Humans have a long history of drawing maps – the earliest versions were discovered scrawled on cave walls 14,000 years ago. Jerry Brotton a map historian from Queen Mary University, London, says that for much of human history north almost never appeared at the top simply because north is where darkness came from. West is also very unlikely to be put at the top because that’s is where the sun disappears.

In ancient Egyptian times the top of the world was east, where the sun rose. Christian maps from the same era also put east at the top, with Jerusalem in the centre. Early Islamic maps however had south at the top because most of the early Muslim cultures were north of Mecca, so they imagined looking up (south) towards it. 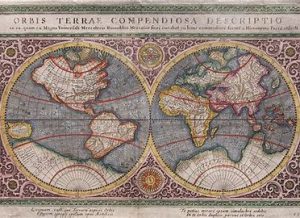 So how did north become the top? One theory is that Mercator’s 1569 world map was a defining moment in north-up map-making. Gerardus Mercator (born in 1512 in Flanders, modern-day Belgium) created ‘curved’ maps that were the first to take into account the curvature of the Earth, so that sailors could cross long distances without overshooting the mark.

So the answer to the question of which way up is the Earth is simple: it is not any particular way up. Particularly if we view planet earth from a space capsule far away.

The 21 Century focus. For young leaders of the future.

If you are not satisfied with our products for any reason, we will refund you the full retail price (less shipping costs), no questions asked, on return of the unused / unopened products within 14 days of delivery.”